My ‘Going public with STRAVA RUN stats’ post published in early April, focused on my run stats up to the end of March, it concluded that I didn’t do enough runs and I really needed to build up gradually.

The aim was that by ‘going public’ would help me stick to a more structured training plan and ultimately do more runs and increase the miles? What happened throughout April?

Tableau helps me keep a track my activity… 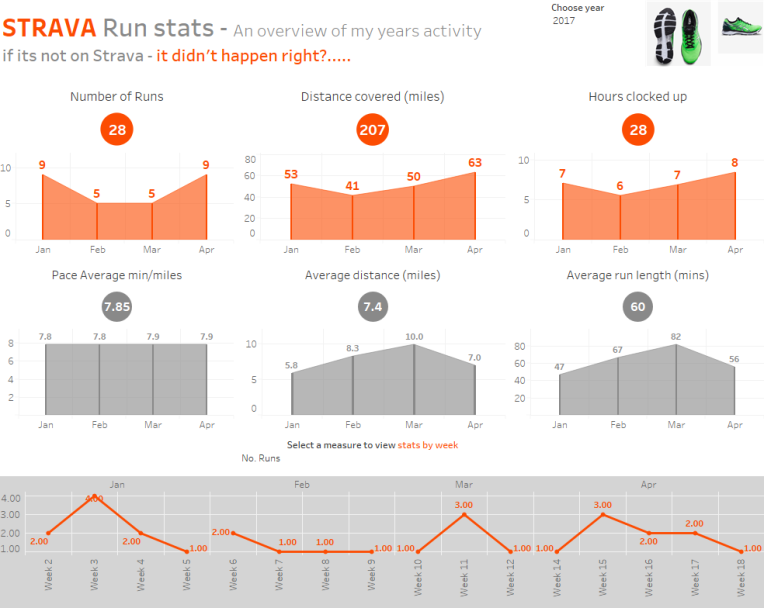 Check out the interactive STRAVA RUN STATS viz on Tableau Public to delve a little deeper into the weekly and monthly stats.

I clocked 9 runs in Apr, 63 miles, 8 hours of running and maintained pace. My average distance was down (but i’ll explain why in a mo) and therefore average run length was shortened compared to March’s stats. However overall I felt the figures (at least) look a little more consistent, especially looking at average distance per run (7 miles) – interact with viz ‘select measure to view stats per week’.

How did April unfold?

I wrote the previous post in week 14 in the hope it would kick start some drive, and week 15 looked promising, bubbling with enthusiasm following ‘going public’ I popped in a solid three runs, followed by two in week 16, two in week 17 and in week 18 I managed  one standard run, plus an open water swim|run training session (not Strava logged – so does it count?). On paper/screen it looks good, in reality it wasn’t so successful, having developed pretty painful tendinitis in both knees – mainly caused by March madness! (check out the viz for details). Basically I put in some silly 12-15 mile runs in March without really building up gradually, subsequently my knees are shot and i’m in constant pain with them, Now under bi-weekly physio, i’m having to do band stretches morning and night. That said the physio said i can still continue my run plan of 2-3 runs per week if i shorten my runs, log my discomfort rating and most importantly do the stretches.

Run days as a proportion of the month.

Monthly figures for 2016 and 2017 (to date) show a pretty consistent increase in distance from September last year (when I became a little more structured in my efforts), and on the whole my pace (minute miles) has increased to an acceptable level (8 min mile-ing). The number of runs i manage per month is still a little erratic, however becoming more consistent.

Whilst the primary intentions of these STRAVA training posts are to allow me to work through my progress and mistakes training wise, ultimately leaving the breadcrumbs to be able look back next year and learn from mistakes encountered in 2017.

Please feel free to comment, i’m really interested in anyone’s feedback and thoughts on run training, and visualising training data in tableau, and of course please do comment on the vizzes them selves and how I could improve these to better show my activity.

Next post: a wider look at fitness in general, taking a peek at my FITBIT daily step averages and swim training (pool and open water) activity.